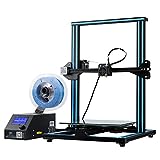 Today we will be following up a video we created a few days back titled “how to create strong parts” as it seems that after tip #1 Layer Height, everyone stopped watching and shared a video from CNC Kitchen which generated a lot of great comments and discussion. With that being the case figured it was easier to just to create a follow up video to answer the discussion points and will break the explanation down into two part with the first covering our intent in the first video and second discussing Stefan results.

Part One, The Recipe:

In the original video we shared 4 core tips which were intended form a recipe which the result where Super Strong Parts, these parts are “solid” parts with no infill and very much like a “cast” plastic part. To create this recipe, I suggest the following tips:

1. Select a layer height at or near the 80% nozzle width rule (~0.3 for a 0.4mm Nozzle or 0.4 for a 0.6mm Nozzle as an example). Note as covered in the first video we need to maintain at least 20% and preferably around 25% “compression”. We discuss this controversial tip more in part two of this comment.

2. Over extrude the entire print (not just the bottom layer) by 3 to 5%. The reason for this is we will increase the compression ratio of tip number one by doing again increasing the layer strength (just like using a smaller layer height as in Stefan’s video) as well as force plastic (due to the higher forced compression) into any small voids.

3. Increase heat, this makes the larger layers “more sticky” so less compression is required to achieve higher levels of resiliency. As too, the more plastic you push, the more heat it will wick away (I did a video on this a couple years back where I went into the math) and keep in mind we also over extruding so this is a critical ingredient to the success of the recipe.

4. Finely the magic, the layer “type” as after setting tips 1, 2 and 3 to find the number of layers and the case of the sample piece it was 31 layers. We then set the Layer Type to 1 Bottom and 30 top layers making this a very solid object. Note in most slicers you do not need to even set the infill as these override it. Before you ask, no this is not the same as setting infill to 100% as infill is infill and can have voids at 100%, whereas surface layers are far tighter (also helped by over extrusion) form again a VERY solid part.

So the intent of these tips are to be assembled into a recipe to create a desired result which in this case is a “solid” part.

In this video, he tested Layer Strength in a “standard” model with “infill”. As in this example because of the low internal surface area infill, the majority of the bonding force will come from the shells which are built upon the varying layer heights of his test. What did he find? Well in the video he concluded that for his recipe the smaller layer heights offered great holding power then their larger cousins.

Even thou there exists a greater number of opportunities for failure. What does this mean? In CNC Kitchens video he puts it well, the more links in a chain, the higher the “probability” that there will be a weak like and therefore a failure, so printing with a thicker layer width should yield outcome where this is true. Yet flaw in this is the recipe (i.e. other related variable) needs to be adjusted for larger layer heights. In Stefan’s test, the smaller layer heights enjoyed success more than likely because of the fact of “higher compression” likely resulted in both greater surface contact as well as engagement.

Keep in mind that if your using a 0.4mm nozzle and 0.15mm layer or a 0.3mm the extrusion is still 0.4mm as that is the nozzle diameter. However what does change is the flow rate and this then relates back to the available heat which lets say is set at 200deg/c for PLA. Now you might think printing at 0.15mm or 0.3mm with that setting both will get the same amount of heat as for the 0.3mm the control loop will deliver more current and therefore equal mounts of heat. Well this is not the case, as the PID (Proportional Integral Derivative) will have a sweet spot and it likely will not be at the top (unless you have adjusted it that way) so if you where to measure the root mean square of the change for the larger layer height you would likely see the 0.3 layer height received far less heat then the 0.15 and this is why in our recipe I suggest to kick up the heat to fill in the RMS holes for pushing the larger amount of filament. Many moons ago I use to develop software for Finite Element Analysis (brake systems predominantly, then transmissions) and what you learn is that failures are comprised of complex systems. So Stefan did some great work in his video and I do not mean to discount it, however to point out it is only valid within the “recipe” used in the test, or a recipe set which runs in that sub-set of testing.

You may have missed