In this episode we will look at issues with the Z Axis on the QU-BD TwoUp! 3D DIY 3D printer kit and how ended up fixing it by editing the Marlin Configuration.h file and updating the revolutions for Z Axis.

The original line in the Configuration.h file was:

Whereas the updated line now reads:

The logic (which admittedly there is better) was when sending a 10mm movement to the Z Axis, it would move only 8.59mm so dividing then multiplying produced the new step count number.  Now this number is not “perfect” it is close because there is error in the 8.59mm because of gantry sag produced a significant variance.  However this is now at least workable.  I will be working to refine this however frankly with the flashing issue of the Mega 2560 and RAMPS 1.4 controller (see more here) I just wanted to see if it work which it did. 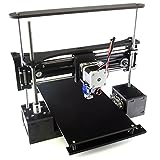 You may have missed

MonoPriceMini Delta – Rambling About Why I bought it!